A Steampunk Wedding: What is Steampunk? 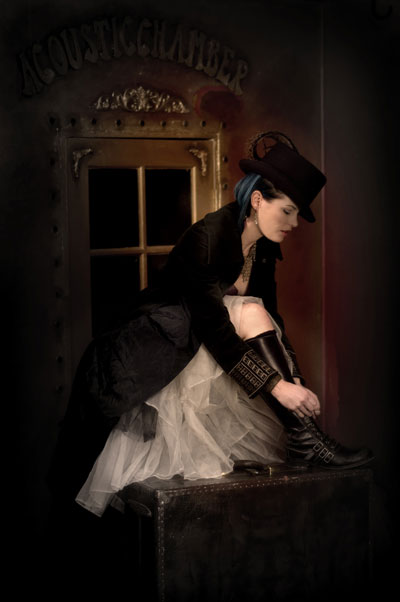 What is Steampunk?  What is a Steampunk wedding?  Up until recently I had absolutely no idea until I stumbled upon it while searching the internet. It is an eclectic mix of Victorian Science Fiction. Think Victorian-inspired wonders like steam-powered aircraft and mechanical computers. Think Jules Verne and H. G. Wells, think Captain Nemo’s submarine and of course 🙂 think Alice In Wonderland!!! 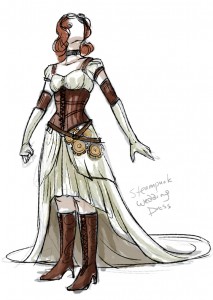 There are magazines dedicated to it, websites dedicated to it and fashion and jewellery galore being created for it.  There was even the worlds first museum exhibition of Steampunk Art held in Oxford in 2010 and it is a rising trend in weddings.  This makes us extraordinarily chuffed as how appropriate is Alice In Wonderland within the Steampunk genre?  Top hats, whimsical accessories and stand out tea parties!  We couldn’t be happier.

I love it.  I wouldn’t necessarily style my wedding in full Steampunk but there are elements which are captivating to me because of their artistry, their bling factor and of course, it is vintage after all.  Like the fashion in the photo shoot I will unveil to you tomorrow (so excited!!!) and the accessories like the hats and the pocket watches – all details that can add a Steampunk dimension to your wedding.

Some Steampunk stuff is pretty hard core and is far too mechanical in its design for me, I’m a softy, but the fashion is incredibly feminine with an edge of strength, depicting the Steampunk Woman to be confident, self-assured and underneath all those clothes, extraordinarily sexy.  Who wouldn’t want to be like that!!  Raise your hand now!  (Mine just shot up in the air with a little bit of an uncontrollable twitch going on).  It has only been three years since becoming a Mummy so I am the epitome of the opposite to the Steampunk Woman: exhausted, has too close a relationship with trackkies, drinks far too much tea and irons frilly knickers in a desperate attempt to become sexy again).

Steampunk is here to stay and it is growing fast as a trend and genre.  Have a look at my previous post for a snippet of Steampunk Wedding Photography, it’s worth it.  If you love Victorian fashion, you’ll love Steampunk!

Seriously, what woman wouldn’t want to wear this?  If not just for a day!

So how do you Steampunk your wedding?

Think Victorian.  Steampunk fashion has no set guidelines, it really is simply an amalgamation of modern styles influenced by the Victorian era. This may include gowns, corsets, petticoats and bustles.  And for the boys think suits with vests, coats and spats or even military inspired garments.

Gizmos, gadgets, and loads of technological or mechanical period pieces such as timepieces, parasols, goggles and top hats are the details that add the Steampunk flare.  I am in love with the zest for unique and whimsical weddings and Steampunk is surely a statement within that.

So if you fancy feeling like a confident, corset wearing character our of a Jules Verne novel then Steampunk should be your inspiration.

And, if I have tickled your curiosity, wait until I unveil the spectacular Steampunk photo shoot tomorrow. (Chuckle).