Secret To An Everlasting Marriage: Till Death Do Us Part 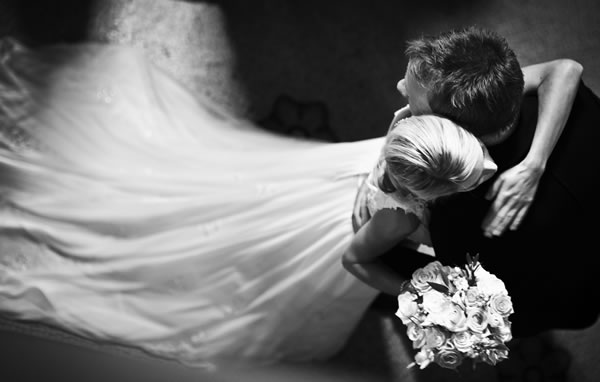 Hi this is Rob, I’m writing this because my Father almost died this week and I wanted to share something that struck a chord about marriage.

You see 10 years isn’t really long is it? (unless you’re a Hollywood actor then you’d probably get an award for that too!) though on the face on things you’d think we would have learnt a thing or two by now, about how to stay married 😉

Well I’m not going to get all ‘preacher’ over this because this site isn’t about preaching and hey let’s face it you came here because you’re probably looking for some cool, unique ideas for your wedding – well that’s why I’m writing this – to give you some cool, unique ideas for after your wedding – after all, you’re not a Hollywood actor are you?? 😉 and you probably want a long lasting forever marriage.

Last Friday my dad fell ill (He has Parkinsons and dementia – though has his mental faculties about 60-70% of the time). The doctor came round the house and told my mother rather unsubtly “he could be gone this afternoon – there’s nothing more we can do for him” – this sent my mother into a spin…

– my dad answers the door eating a hamburger! You can imagine the look on the her face!!!!

The weekend goes and Monday arrives. He’d slipped down the side of the bed and lay there for 2 1/2 hours and very close to death.

So What’s the Secret to Everlasting Marriage?

I teach, train, coach and consult to billion dollar companies – one of my clients is Nuffield Health – I teach people something called Neuro Linguistic Programming (NLP) for short – If you’ve come across Paul McKenna, Derren Brown, Anthony Robbins etc – this is what I do. I teach people how to use and understand their minds better to create more success in their lives. I’ve been doing this for about 20 years and have worked with one of the guy’s who started it all. So I know a thing or two about people and what makes them tick but…

…sometimes the secrets remain elusive for some time – prompting our conscious and tickling our minds until it becomes all too clear from experiences.

I’ve been thinking about this ‘problem’ in another context recently and that was to do with business success – what is it that makes some individuals more successful regardless of education?

Here are 3 secrets to an everlasting marriage

Acceptance – Accepting our partners habits. These are the habits that through time come to create a meaning for you that you don’t understand or like. For example – every-time he’s late it means he doesn’t care. Everytime he leaves the seat up it means he doesn’t think about me. Every-time she cleans the house she loses my stuff and doesn’t think about me. Every-time he goes our with his mates I’m left alone and this means I’m not number one.

These tend not to happen until sometime later in the marriage, after some 1-2 to 3-5 years later. These are the consistent habits of the other where we make meaning about something they do that we don’t like and think it has a reflection upon whether they love us or care about us. These ‘things’ that both of you will do are your consistent personality habits that get hidden throughout the early years of courting (I know, so old fashioned isn’t that word ;-)) and the honeymoon period. They’re hidden by the feelings of love and infatuation. Biologically glazed over so we can bond and procreate. When this phase moves on, it’s these ‘meanings’ we make of our partners behaviour that can start to cause derision.

What you can do is to find the top 5 habits the other person does you don’t like or cause you a niggle and learn to understand that these behaviours do not reflect their feelings of love or care about you. They’re just habits with no meaning about the relationship attached. Find out what they do mean by asking your partner.

Love – Love is a word with depth and very difficult to untangle as it’s cast across a complex array of things we do, think and say. Just saying or feeling deeply in love isn’t the be-all and end-all to staying in love. There are many things that will pull at the tapestry of love to untangle it. But love with passion and unselfless bound for your partner is a great place to start. To want to do things for him or her without thought for yourself. To put yourself aside momentarily because they are your world – and of course it’s a two way thing. You do things because you want to do it for them and solely them. If you’re a parent you’ll know it’s this same full unconditional act you have with your child.

Doing things for the other – This is more than just ‘doing something’ for your partner unselfishly, rather its’ about ritual, habit, consistency and persistence. It’s what you do every so often consistently that is the unselfish act – the ritual of loving and giving. Persisting against the natural habit of ‘not bothering’, ‘maybe next week’, the natural habit of procrastination and laziness. This is the hardest one to overcome and the hardest secret to master, if ever at all. Though it’s the one that makes the biggest difference. Let me explain:

My father had been slumped over for 2 1/2 hours. He was found nearly comatose, mumbling incoherently, wildly staring at the wall at deaths door again. If this was the time, this should have been the time. My mother called emergency services while I called the local doctor.

The doctor banged open the door, ran up the stairs and managed to get him back to bed. Surely this was his time – but something inside me kept saying – this is bullshit – he should have had proper care from those 3 days prior, not left alone with my mother who was too stressed out to know what to do. It shouldn’t be just ‘one big bang’ then left alone. I just knew that the problem had all been about blood pressure due to dehydration because of his condition. In fact I was certain that his condition other than the Parky’ was 80% food and water. The Rapid Response unit was called and we were given a night sitter to watch over him and help him to the bathroom, though he was still in a mortally dangerous state and it could go either way. I argued with the doctors about 24 hour care at home. There was no way my mother could move him from the bed to the bathroom as he’s a stubborn old goat!! They couldn’t and were unable to get 24 hour care, other than taking him to hospital, which we were advised against.

I stayed with him and my mother for 2 days and 2 nights feeding him, arguing with the doctors trying to get 24 hour help, watering him and trying to get him re-hydrated to bring his blood pressure up. Each drop of water, each mouthful taken was a success and every action was geared to do one thing only, keep him alive and stabilise his condition. Not once were we told that this is all we needed to do. We were pushed from service to service each with their own excuses – no-one able to do the right thing and spend the time nursing him back to health. The GP the nurses, the sisters would come in once a day have a look, write a few notes and go. I had to ask for them to keep checking his BP. I had to get VERY specific and question the different stories they each had about what the problem was and the help (that was or was not coming). I had to be the watcher. I had to consistently make sure he would drink upto 1.5 litres a day, make sure he’d eat enough food in his delirium, though every instinct of his was to fight it and every instinct of mine was to get him back to health.

On the third day despite everything we were told, everything that should have happened, that didn’t, that we did – he managed to come down the stairs with assistance. His blood pressure had risen enough and his hydration levels were rising. Now it was about keeping the work up and re-hydrating him fully. Why, because dehydration makes the brain swell and puts pressure on the cells that cause them to interfere with the signals, this causes delirium and the inability to fend for self and then other functions of the body begin to fail. There is no-one to blame, red tape and bureaucracy are a hindrance, though we can get through and past these because of our own determination and drive – sometimes it’s a shame it has to be something big before the wheels are set in motion.

The act of consistency is the secret to an everlasting marriage.

And so with a marriage, a business and other habits we try to change like losing weight, stopping smoking, drinking or changing what is no longer serving us to something we want – it isn’t about quick fixes or big one-time attempts – it’s the same – consistency, persistence and drive. It’s this same act I’ve witnessed in people through my 20 years in personal development who get the change and success they want. It isn’t about perfection, nor about doing big things every so often. It’s the small measurable acts that through consistency make the biggest difference. The water that carves the hard granite into a canyon.

Find what the water is that drives your marriage and your relationship – make it a habit and a ritual to do these things that keep it hydrated and keep it going to make it alive. A marriage isn’t just two people – it’s a life too.

Have an awesome day and beyond.

My dad’s in good hands now. We have a private health care company in, teaching my mother what to do on a consistent basis that will help him and her have their marriage back.